Debt and Taxes Are Unavoidable in Commercial Real Estate

Optimize Your Debt with These Tips 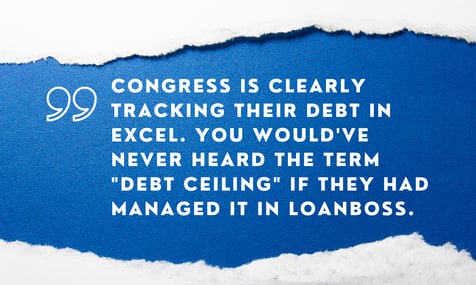 Sure, that was a little cheeky but this topic is everywhere right now, so we decided to join the Debt Ceiling convo. Here we will breakdown the (some of the) issues in Washington, what is a debt ceiling and potential impacts of a default.
Debt Ceiling vs Congress
The debt ceiling is generally raised each year, but every so often it becomes a huge deal when politicians use it as leverage.  It is a huge topic right now because of what transpired in Congress a few weeks ago as the Republicans elected a Speaker of the House.  Normally, this is a benign process. This year, however, some GOP hardliners refused to support Kevin McCarthy until their demands were met.  It took a record 15 votes (normally it takes 1) and he had to make a lot of concessions to get the votes of a few holdouts.  They now know they can hold Congress hostage.
This creates a game of political chicken with higher stakes than normal.  Democrats would usually say, "No way Republicans are going to let the US default, so this is all a bluff."  But it isn't all Republicans, it's a handful with outsized leverage.  And traditional Republicans don't mind the appearance of some mad dogs threatening the process so they can get what they want.  "We would love to play nice with you Democrats, but they are holding us hostage, too.  They are crazy, we can't reason with them."  Summoning their inner Tom Cruise, they may even add, "Help us help you..."
We won't miss a bond payment...yet.  The Treasury Department has "extraordinary measures" it can take to buy itself about 4-5 months.  If we approach that date without a debt ceiling resolution, markets will become increasingly antsy about the possibility of a US government default.  In the meantime, considerable energy will be spent by Congress on messaging.
Each side is trying to win the Messaging War with the American public.

How the voting public reacts to these messaging tactics will help determine which party is more likely to get their way.

The government funds itself primarily through tax receipts and borrowing.  All those taxes that get taken out of your paycheck go to help pay for the things the US government does, but not all.  This gap is generally referred to as the deficit.  That gap is covered by money the government borrows (we'll ignore the fact that some people actually do still save money these days...)
There is a self-imposed limit on how much the US federal government can borrow, known as the debt ceiling. It's a little like a credit card limit.

The US hit that limit this week, which means we can't borrow any more money to fund that gap. The US government borrows money by issuing Treasurys, which are bonds (or IOU's) to bondholders.  Every week, the US Treasury has auctions where it sells Treasurys in the open market, which are bought up by investors.  For example, there was a $17B 10yr Treasury auction this week.  The US government sold $17B in IOUs to bond investors with a coupon around 3.35% (where the 10yr Treasury was trading).  For the next 10 years, the US government will send the bondholder an interest payment of 3.35%.  In exchange, it receives $17B in cash from investors today that it can spend somewhere.  Also, before you email us telling us we spelled the plural of Treasury wrong, just know that we didn't.
Notably, the US government borrows money to make interest payments on previously issued bonds.  That's like you borrowing from one credit card to make an interest payment on another credit card.
The 10 Year Treasury is literally the benchmark for every single investment in the world.  It is considered the risk free rate of return, which in turn measures other returns. But its only considered risk-free because the US has never missed an interest payment. If the government has run out of money, and it can't borrow any more, paying existing bond holders is at risk.  Someone that bought a 10yr Treasury four years ago assumed they would always receive their interest check next month, but they might not.
This threat of default can create ripple effects:
Potential Impacts of a Default
If the federal government ultimately shuts down, it will likely mean about 1mm employees will be furloughed and stop receiving paychecks.  As that drags on, those people will not be contributing to the economy (because they aren't getting paid) and it negatively impacts the economy.  Not coincidentally, out of the 1mm federal employees, there are a few that actually keep getting paid during a shut down. Congress.
So the people that stop paychecks to federal employees are not feeling any pain themselves.  The people willing to hurt the economy don't feel a thing.  The people playing a game of debt ceiling chicken don't feel the effects of a failed deal.  They just keep pointing the fingers at each other, hoping their messaging is better than their opponents' messaging.
No wonder politicians have a lower approval rating than cats. (sorry cats)
Previous