Our team attended the CRE Finance Council Annual Conference - virtually - and found it to be incredibly interesting and informative. We know not everyone could attend, so here are our top 5 takeaways from the event. 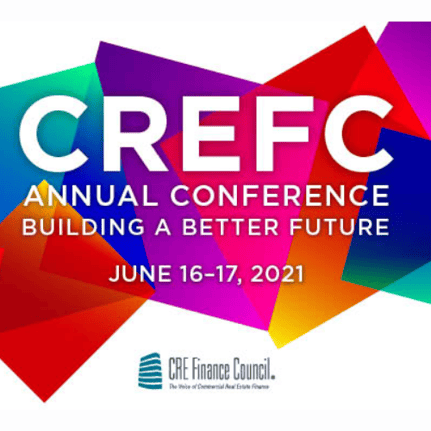 While the transition away from LIBOR and to SOFR has been in effect for a while now, a date has finally been established — June 30, 2023. It's important to understand their differences to truly conceptualize the effect the shift will have going forward. Some main points to highlight include

While SOFR has its advantages and its disadvantages, the important thing is that we need a rate with an adequate derivative market to replace LIBOR and aside from SOFR, there are no alternate indexes that meet this criteria.

Throughout the conference, we've noticed an increased concern with ESG which only made the ESG panel more interesting.

Increased efforts have been made to economically incentivize investors to adopt and implement ESG strategies; efforts include more mandates to shift toward green initiatives.

While environmental is the focus for most investors currently, it is difficult to enforce. The main challenge is data attainment. In an attempt to get investors to disclose information, conditions have been written into loan docs. The SEC has also established a task force to help enforce these conditions.

Socially, the focus is on the underserved population. Social implications of ESG are starting to gain traction, but governance is slow to be addressed because it is not as clear. What does governance even entail? What's the goal?

COVID has revealed green real estate to be more resilient than regular loans, increasing demand. But there is still a need to improve measuring efforts and data quality to quantify climate risk.

COVID affected the various commercial real estate sectors differently. Now, we're seeing some of the tightest spreads between sectors — hospitality is just getting along, while others are thriving. Are the safe bets still the safe bets?

Lots of equity have been raised and is ready to be utilized. The abundance of liquidity in the debt market led to unbelievable terms from lenders, but there is not much liquidity in senior housing, construction, or others similar.

Transactions still happen but cost vary based on leverage — this might lead some to the debt fund space because they deal with different leverage points.

Multifamily was a safe bet because of its performance during the pandemic. But geography has a huge impact on how safe it is. In general, the Sun Belt is still favored; people are moving to areas with good weather, universities, and good cost of living.

Institutional equity is moving to secondary/tertiary markets, but real estate is local and that's where you have to do your due diligence.

There is a clear need to improve housing and housing communities. With a thin margin in Congress, huge efforts have been made toward spending and taxing.

Changes in infrastructure have been agreed upon within the Senate but the White House is just entertaining the idea. The big question remains: "How are we going to pay for this?" The favored plan to pay for infrastructure changes is with a gas tax.

This plan has been favored since the 90s but as electric cars become more popular, controversy arises. They want to use the tax as an attempt to correct wealth inequality but struggle to determine how much of the burden electric car owners should share. Despite the controversy around changing this course of action, it remains the most popular.

One thing's for sure, there is a need to increase spending on infrastructure.

Read more on debt and taxes within the CRE industry here.

#5 - Working From Home or Living at Work

How far are people moving? Not as far as you'd think.

Most moved out of their zip code, but within the same state. There were also a lot of people moving to neighboring states. These people were likely anticipating a return to the office and did not want a long commute. Willingness to commute only increased with a hybrid work schedule. Without a hybrid schedule, it's likely those that moved away from the cities are going to regret their decision.

However, the shift from urban to suburban was likely temporary. While people are already moving back into the cities, they may not be what they once were. Due to increased crime, homelessness, drug use, and a decrease in the quality of life, people feel less safe in the city now than they once did.

Slowly, but surely things are getting to our new normal and as we saw from the conference, the Commercial Real Estate space is no different. It seems to have the same cautious optimism that we all have right now, which is promising. We'll keep our ears out for more clarity around these subjects and will share any interesting points that arise.

Talk to us! Email us at theboss@loanboss.com with any questions or to continue the conversation.

Check out our other blogs for more industry insights!

What is the Repo Market?

The Value of CRE Professionals is in the Last 2%